skip to main | skip to sidebar

Tonight was another meeting about the Vanier Park Dirt Jumps. Once again, things seem to be going along really well and the Park Board seems to be in favour of this going forward. There was some opposition, but more on that later.

I wasn't too clear on what was to be decided at this meeting. Once I arrived I figured out that this was to present the findings from the open house and public consultation process. Based on that feedback, a subcommittee of the park board was making the decision on whether or not to go forward. I was a few minutes late, but I arrived in the middle of Mark Vulliamy (Manager of Research and Planning) presenting his findings from the consultation. The response that he highlighted seemed overwhelmingly positive. They had every piece of communication from the public noted and every response from the open house laid out on a chart. The response at the open house was something like 82% in favour. Even most of the phone calls and e-mails that were received were positive.

Lesson #1 - The park board definitely takes note when people get in touch with them. They had noted every phone call, every e-mail and every comment from the open house. They put greater weight on communication coming from nearby residents. Every little bit helps.

Mark also went broadly over the plan and what had lead to things getting to this point. He noted that Oak Street hadn't been built by the city, but they had no problems with it (other than concerns that the trails were damaging the trees) and even the neighbours seemed to enjoy it. He also pointed out that there are some dirt jumps in the area of this proposed park and nobody has ever made much of a stink about them.

Lesson #2 - While I figured an illegally built set of dirt jumps would have been a negative against us (both in Vanier Park and at Oak Street), the city put a lot of stock in the fact that these areas existed and didn't cause any problems with the neighbours. Who knew piracy could pay off?

From there, the meeting progressed into presentations from members of the public. There was a broad selection of people in support of the park (pro riders, shop owners, dads, girls, moms, etc) and the subcommittee seemed to grasp most of the points that were being made:

1) Every other municipality in Metro Vancouver seems to have something like this except for Vancouver.

2) The kids are getting fat and they need somewhere to go.

3) Everybody on bikes gets along and there has never ever been a problem at a dirt jump park. Ever. Anywhere.

4) Don't forget about the kids. They really, really need somewhere to go.

Once the cyclists were done, the naysayers had their time at the podium. Against us was the head of the Bard on the Beach and the head of the Kits Point Residents Association. The Bard on the Beach fellow was mostly concerned with the potential for noise and pointed out that perhaps there could be a better use for this land. He seemed like a reasonable dude and I'm sure that if we sat down and talked to him - perhaps showed him a dirt jump park - his concerns would be somewhat alleviated. But maybe not.

The Kits Point Lady seems a lot less likely to be brought over to our side. Her key point seemed to be that they fought any attempts by anybody to put anything remotely close to anywhere near Kits Point. She pointed out that this spot of "unspoiled greenspace" shouldn't be handed over to a "special interests group". She also complained that they hadn't been told about this until the notice went out for the public consultation and wished that they had known earlier on. I thought this was interesting as, well, I mean, isn't that the point of public consultation?

Lesson #3 - Even if you don't think it's possible, there will always be somebody that doesn't want you to do something and doesn't really want to talk to you about it.

Once everybody spoke, the 4 counsellors on the sub-committee made some comments and everything said was overwhelmingly positive. One of the counsellors even admonished the Kits Point lady for referring to cyclists as a "special interest group" and pointed out that if you looked at the pictures and all the garbage and missing trees in the area, it was hardly an "unspoiled greenspace."

So, on we go to the next step. I'm not exactly sure what this means, but it seems that the Park Board Staff now have the go ahead to dig into the details of things and then they will present it for a vote to the Park Board in a few months.
Posted by Dave at 7:26 PM 1 comment:

Latest Bike and a New Dealer

Here's a shot of the latest bike that I built up. I have some decent photos of the bike so I thought I'd post them. 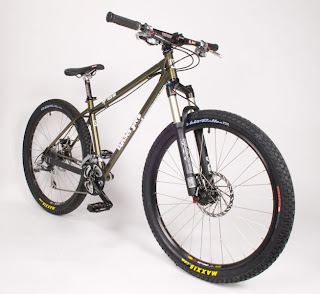 This bike is a little bit different and built for a lady. I put a slightly shorter travel fork on it than usual (Rock Shox Revelation) and a regular front hub up front vs. the usual 20mm. I kept the front end low with a flat bar and flipped the stem. It fits a smaller person quite well.

Also, I put a bike and a frame in at Snowcovers on 3rd Avenue and a fresh build in at North Shore Bike Shop. Go check them out.
Posted by Dave at 7:22 PM No comments: